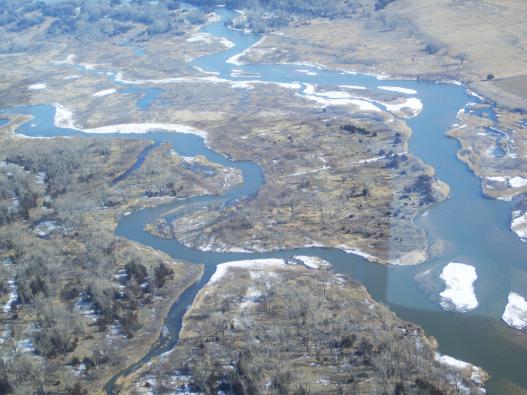 During the First Increment, the Platte River Recovery Implementation Program's objective was to protect, restore and maintain 10,000 acres of habitat. The Program’s long-term objective for land is to acquire land interests, restore where appropriate, and maintain and manage approximately 29,000 acres of suitable habitat along the central Platte River between Lexington and Chapman. Land acquired during the Program’s First Increment is credited to this long-term objective as will certain lands that meet criteria established by the Governance Committee but are managed by other entities, such as environmental organizations or utility and irrigation districts.

The initial focus of land activities will be on acquiring interest in land considered part of “habitat complexes” of interest to the Program — riverine habitat, wet meadow habitat, and associated buffers. Noncomplex habitat such as sandpits (important to the terns and plovers) and wetlands (important to whooping cranes) will also be considered. Land-related activities will be guided by the Executive Director and the Land Advisory Committee in partnership with landowners along the central Platte River.

Under the Endangered Species Act ( ), federal agencies must ensure that water projects do not harm the continued existence of any threatened or endangered species or adversely modify critical habitat. The U.S. Fish and Wildlife Service concluded that habitat for the threatened piping plover and the endangered whooping crane and least tern, was significantly reduced by water diversions and other changes in land use through the Platte River Basin. In addition, the pallid sturgeon could be negatively affected by Platte River basin activities.

The Platte River Recovery Implementation Program (Program) brings together the states (Wyoming, Colorado and Nebraska), federal government, water users, and environmental groups to work collaboratively to improve and maintain the associated habitats for the designated species. The Program is intended to address the and loss of habitat in Central Nebraska by managing key land and water resources in the central Platte region and the lower Platte River stretch.

The initial focus of the land acquisition process is on habitat complexes. A habitat complex consists of wet meadows, channel areas, and buffers. Channel area is the portion of the river that conducts flow and is bound on either side by stable banks or permanent islands with vegetation that obstructs view. At low flows it includes interconnected small channels and exposed sand or gravel bars and non-permanent islands. Wet meadows are areas with a generally level or low-lying undulating surface consisting of a mosaic of swales with wetland soils and vegetation and ridges with upland native or restored grasslands. Buffer is used to shield wet meadow or channel habitat areas from potential disturbances.

The purpose of the Program’s Land Plan is to acquire interests in lands between Lexington and Chapman, Nebraska, to restore them where appropriate, to maintain them, and otherwise to manage them so that they provide benefits to the target species based on the individual features of the land while using some or all of the characteristics of habitat complexes. Habitat acquisition is conducted on a willing seller/willing buyer basis. All land acquisition and management decisions take into account the costs, the relative benefit to the target species, and contribution toward fulfilling the Program's objectives. The Program manages its lands in accordance with a good neighbor policy.

The First Increment (13 Years, 2007- 2019) land budget is $39,131,000 (not including cash equivalent credits) in 2005 dollars. The budget covers acquisition of property rights and restoration and maintenance of Program lands during the first increment. The costs will also include tax payments and potential mitigation of adverse impacts.

Because the Governance Committee and Program are not legal entities that can enter into contracts or hold property, the Program uses a Land Interest Holding Entity (LIHE) [The Platte River Recovery Implementation Foundation] to hold title to Program lands, or to enter into leases, easements, and other contractual arrangements for Program lands. All purchases, leases, easements, and other land-holding transactions are made at the direction of the Governance Committee, working through contractual arrangements with the LIHE. The Platte River Recovery Implementation Foundation was established through the Nebraska Community Foundation. To avoid any potential conflicts of interest, the LIHE is prohibited from managing Program lands.