The program has three main elements:

These elements are implemented according to underlying principles that require interests in land to be acquired only from willing participants and that avoid increasing tax burdens to local citizens by paying taxes or their equivalent on Platte River Recovery Implementation Program lands. Program lands are held by a Land Interest Holding Entity (rather than by the federal or state governments) and are managed under a “good neighbor” policy.

Efforts to re-license Kingsley Dam on the North Platte River in western Nebraska, the presence of threatened and endangered species, and the U.S. Fish and Wildlife Service’s 1994 Biological Opinion on Platte River operations provided the backdrop for conflict over the Platte River’s vital water. Rather than engaging in years of courtroom battles over limited water supplies and individual river species, the governors of the three basin states joined with the Secretary of Interior in July 1997 to sign the “Cooperative Agreement for Platte River Research and Other Efforts Relating to Endangered Species Habitat along the Central Platte River, Nebraska” (also see 2006 Cooperative Agreement).

As a part of the Cooperative Agreement, a Governance Committee (GC) was formed to lead the negotiation process. The consists of representatives of the three basin states; the Bureau of Reclamation; the Fish and Wildlife Service; water users from each of the three basin states; and environmental groups. The work of the culminated in early 2006 with a Final Program Document containing direction for all key elements necessary to implement a program to manage land and water resources to provide benefits for four “target species” on the river in Nebraska: the endangered whooping crane, interior least tern and pallid sturgeon, and the threatened piping plover. The secretary of the interior and the governors of Colorado, Wyoming and Nebraska all signed the Final Program Agreement and the program commenced on January 1, 2007.

The program is being implemented incrementally. The First Increment initially covered a 13-year period from 2007 through 2019, and the current First Increment Extension covers another 13 years, through December, 2032. The overarching goal of the program is to utilize federal- and state-provided land, water and scientific monitoring and research to secure defined benefits for the target species and their habitats in the central Platte River. The Program also provides Endangered Species Act ( ) compliance for existing and certain new water-related activities in the Platte basin upstream of the Loup River confluence for potential effects on the target species. In addition, the Program reduces the likelihood of other species in the area being listed under the . Further, the Program mitigates the adverse effects of certain new water-related activities through approved depletions plans.

It is important that the Program establish and maintain an organizational structure that ensures appropriate state and federal government and stakeholder involvement. As during development of the Cooperative Agreement, the program is led by a Governance Committee (GC) consisting of representatives of Colorado, Wyoming, Nebraska, the Bureau of Reclamation, the Fish and Wildlife Service, South Platte River water users, North Platte River water users, Nebraska water users, and environmental groups. The Program convenes standing advisory committees to assist the in implementing the program. These committees include the Technical Advisory Committee, the Land Advisory Committee, the Water Advisory Committee, the Independent Scientific Advisory Committee, and the Finance Committee. In addition, an Adaptive Management Working Group ( ) has been formed to inform the on the implementation of the Program’s Adaptive Management Plan.

The program is estimated to cost roughly $320 million in 2005 dollars with the monetary portion of that being $187 million. The federal government contributes $157 million and Colorado and Wyoming jointly contribute $30 million. The remaining portion comes in terms of land and water from the states; Nebraska’s entire contribution is of this nature. The total cost of the program in terms of cash, water, and land is shared equally between the federal government and the states. 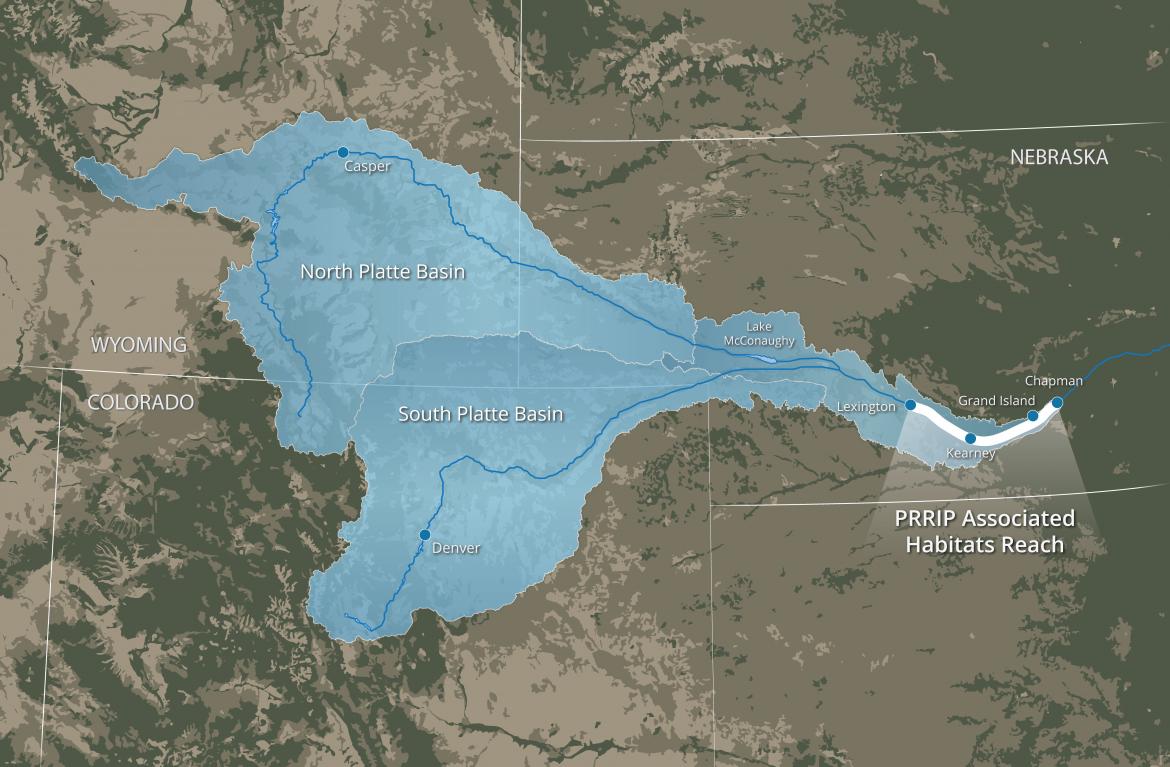 While the program is designed to provide compliance for existing and certain new water-related activities throughout the Platte River basin upstream of the Loup River confluence, the land acquisition and management for the target bird species occur in the central Platte River region (Lexington to Chapman, Nebraska). Program water activities are designed to provide benefits for the target bird species in the central Platte River region and for the pallid sturgeon in the lower Platte River stretch (below the Elkhorn River confluence). These areas are generally known as the “associated habitats.”