The interior least tern (Sterna antillarum athalassos) is the smallest member of the gull and tern family, measuring 8-9 inches long and having a 20-inch wingspread. Males and females appear identical with a black crown, white forehead, gray back, gray wings above with white below, orange legs and a black-tipped yellow bill. Immature birds have darker feathers, a dark bill and dark eye stripes on white heads.

Least terns forage on small fish they capture by diving into shallow riverine habitats and freshwater ponds. Along the central Platte River, these birds usually feed within the river which is generally a short distance from their nesting colony. Least terns are a colonial nesting bird that mob predators or other intruders by dive-bombing and defecating on them. Throughout its range, least terns breed and nest on barren to sparsely vegetated riverine sandbars, sand and gravel pits, lake and reservoir shorelines, rooftops, ash pits, and salt flats from mid-May to early August. Along the central Platte River, least terns generally nest on managed off-channel nesting habitat created by sand and gravel mining operations or through excavation activities of the Program.

Least terns usually lay three eggs in a shallow scrape and may renest if their nest is destroyed. The nest is an inconspicuous, unlined scrape usually containing three brown spotted eggs. The incubation and brood rearing period for nests and chicks generally lasts from 38 to 50 days. Least tern chicks are not capable of foraging on their own so only a single brood is raised each year, as adults must continue to feed offspring for several weeks after fledging.

Least terns are long-distance migrants that breed in North America and winter in Central and South America. The interior least tern historically nested along the Colorado (in Texas), Red, Rio Grande, Arkansas, Missouri, Ohio and Mississippi River systems. It currently nests in the Mississippi and Rio Grande River basins from Montana south to Texas and from eastern New Mexico and Colorado to Indiana and Louisiana.

The interior least tern was federally listed as endangered on June 27, 1985, primarily due to the loss of nesting habitat as a result of dramatic alterations (channelization and impoundment) of important river systems; however, a recently completed five-year review recommends delisting least terns due to recovery. The U.S. Fish and Wildlife Service is now in the process of putting in place the necessary monitoring plans, conservation agreements, and population models in hopes of moving forward with a proposed delisting in the near future.

Reproductive success along the central Platte River depends greatly on creation and maintenance of off-channel nesting habitats and protection of nesting birds from disturbance and predation. Several methods have been used to deter humans, pets, and predators from nesting areas including fences, trapping, warning signs, and public information efforts. 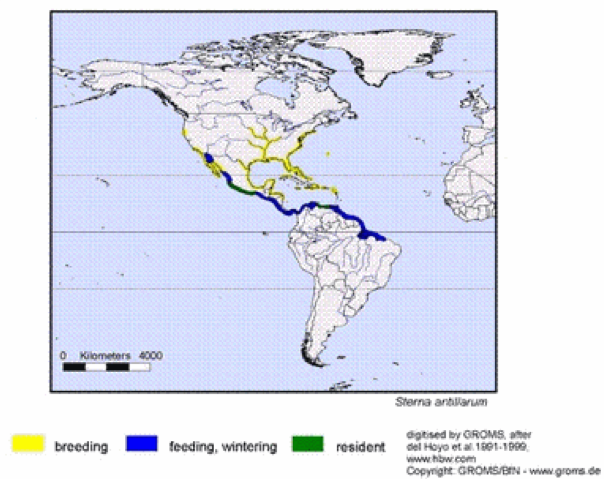