The piping plover (Charadrius melodus) is a sandy-gray, robin-sized (7 inch) shorebird with one dark breast band. It has a dark stripe across the crown during the breeding season. Other characteristics include a white wing stripe and a white rump that is visible in flight. A common relative, the killdeer, is larger, more darkly colored and has two dark breast bands.

Piping plovers feed along the water's edge on small insects, spiders, crustaceans and mollusks. Along the central Platte River, these birds usually feed along the shoreline of off-channel nesting habitats or on low sandbars within the river which is generally only a short distance from their nesting site. Piping plovers are a solitary nesting bird that draws predators away from nests and young using an injury feigning broken-wing display. Throughout its range, this species nests from April to early August. Nests are generally located on barren to sparsely vegetated sand and gravel found on riverine sandbars, sand and gravel mines, lake and reservoir shorelines, and sand, gravel or pebbly mud found at alkali wetlands.

Piping plovers breed in North America and Canada and winter along the Atlantic and Gulf coast and in the Bahamas and West Indies. Three breeding populations of piping plovers are recognized; however, this discussion focuses solely on the northern Great Plains population. This population breeds in alkaline wetlands and along lake shorelines of the northern Great Plains and on the Missouri River and its tributaries in North Dakota, South Dakota, and Nebraska. 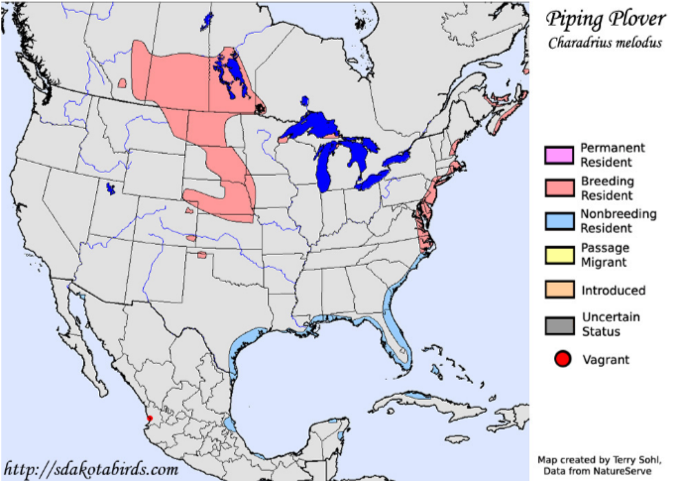 The northern Great Plains population of piping plovers was listed as threatened on January 10, 1986. The piping plover faces several threats including habitat disturbance and destruction, predation, and disturbance of nesting adults and chicks.

Reproductive success along the central Platte River depends greatly on creation and maintenance of off-channel nesting habitats and protection of nesting birds from disturbance and predation. Several methods have been used to deter humans, pets, and predators from nesting areas including fences, trapping, warning signs, and public information efforts.