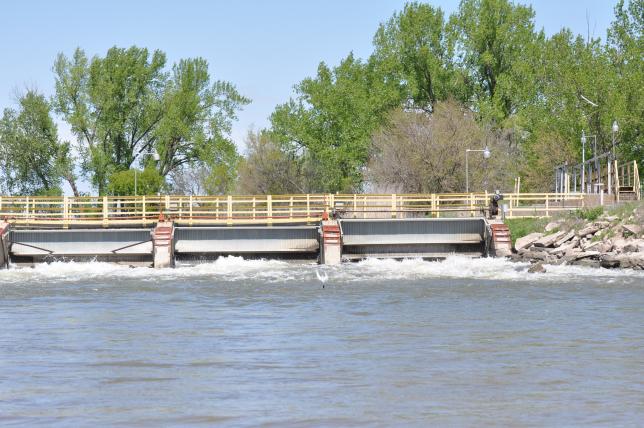 The program’s objective is to use incentive-based water projects to provide sufficient water to and through the central Platte River habitat area to assist in improving and maintaining habitat for the target species. During the First Increment, the program has focused on re-timing and improving flows to reduce target flow shortages by an average of 130,000 to 150,000 acre-feet per year. In addition to the improved flow conditions, small pulse flows in the spring are intended to create vegetation-free sand bars suitable for plover and tern nesting.

Flow re-timing will be accomplished in part by releases from the ( ) in Lake McConaughy. The is a portion of the water stored in Lake McConaughy that is set aside and managed by the Fish and Wildlife Service for the benefit of the target species. Other actions include slightly revised operations of other water systems; general re-timing of Platte River system water projects and other project management actions; and implementation of new water supply and conservation projects in the basin. Success of the also relies on implementation of agreed-upon New Depletions Plans in the three states and by the federal government in accordance with the program goal of offsetting new depletions to the Platte River that occurred after July 1997.

Water and the Endangered Species Act

The waters of the Platte River serve the people of Wyoming, Colorado, and Nebraska in many ways. Federal and non-federal water projects in the Platte River Basin, including 15 major dams, provide municipal and industrial water supplies for about 5 million people, irrigate millions of acres of farmland, and generate millions of dollars of hydroelectric power. These projects also provide flood control, recreation, and fish and wildlife habitat.

Under the Endangered Species Act ( ), federal agencies must ensure that water projects do not harm the continued existence of any threatened or endangered species or adversely modify critical habitat. The U.S. Fish and Wildlife Service ( ) concluded that the threatened piping plover and the endangered whooping crane, least tern and pallid sturgeon, could be affected by water diversions and other changes in land use throughout the Platte River Basin.

The Platte River Recovery Implementation Program (Program) brings together the states (Wyoming, Colorado, and Nebraska), federal government, water users, and environmental groups to work collaboratively to improve and maintain the associated habitats for the designated species. The Program is intended to address the concerns including loss of habitat in Central Nebraska by managing key land and water resources in the central Platte region and in the process avoiding harm to the lower Platte River stretch.

Changes in the Platte River

Historically, flow from snowmelt runoff was so large and full of sediment that it helped to remove vegetation from the Platte River and kept the river wide and shallow with bare stretches of sand. It provided a safe place for cranes and other birds to rest at night, allowing the birds to keep predators in sight. Terns and plovers also used the sandbars for nesting and raising their young.

Over the past century, 70% of the water that was originally in the Platte has been removed or retimed by storing it in reservoirs. Without these flows and the sediment load carried, sandbars and riverbanks have become overgrown with vegetation and the channels confined and narrow.

To restore the habitat, the Program clears trees and other vegetation, increases flows at critical times, and augments sediment volumes in the river. The Program, together with the also releases “pulse flows” of water, a flow of 5,000 to 8,000 cubic feet per second (cfs) for three days in the spring, to help clear sandbars and maintain a braided river. Such pulse flows are, on average, planned for two out of three years. One (1) cfs equals about 450 gallons per minute.

The overall water objective of the Water Plan for the First Increment is to improve flows by an average of 130,000 to 150,000 acre-feet per year (by reducing shortages to “target flows”). Target flows were developed by the and are the way the Program will compare river flows and measure progress.

One acre-foot is the amount of water required to cover one acre to a depth of one foot and equals about 325,580 gallons. For comparison, the capacity of Lake McConaughy at a normal full level is approximately 1,740,000 acre-feet.

The Program increases flows through using existing projects and retiming return flows to the river. Three initial projects: Tamarack I in Colorado, the Pathfinder Modification in Wyoming, and the Nebraska , contribute to meeting the water objective. If put into action and operated as described in the Program Water Plan, the three projects will be credited for an average of 80,000 acre-feet per year toward the First Increment water objective.

The remaining portion of the water objective (50,000 to 70,000 acre-feet per year) is met through a program of water conservation and water supply activities. Potential projects are identified in the Program Water Action Plan, which was updated in 2009. Under most circumstances, the water used for the “pulse flows” also counts toward the objective.

The Water Plan is the roadmap developed to meet the First Increment Goals. A study titled “Reconnaissance-Level Water Action Plan” was prepared in 2000 and utilized to formulate the Program’s Water Plan. The study identified potential water conservation and water supply projects (such as storage reservoirs, groundwater recharge, water leasing, and improved water management) and estimated the amount of water that could be re-regulated/conserved and credited toward the Program objectives. It described the process for moving projects through feasibility studies and implementation, with the approval of the Governance Committee. The study was updated in 2009 and focuses on water projects that can be implemented to achieve the First Increment Objectives.

The flow objectives described above are intended to improve Platte River flows compared to flow conditions when the Cooperative Agreement was signed. In addition, water use has increased or will increase above 1997 levels and must be offset. The three states and the federal government each have plans (“depletions plans”) that describe how they will offset impacts to target flows from water-related activities that were started after July 1997. Water used to offset these activities does not count toward the First Increment Goals because it is replacing impacts from new activities. Any changes to depletions plans must be reported to and approved by the Program’s Governance Committee.