The pallid sturgeon is one of the largest freshwater fish species in North America. They are generally between 30 and 60 inches in length and weigh as much as 85 pounds. Although visually similar, the shovelnose sturgeon is much smaller and usually weighs no more than 5 pounds. Pallid sturgeon are much paler in coloration with grayish white backs and sides, while shovelnose sturgeon are brown. Pallid sturgeon turn whiter as they age and younger specimens are easily confused with adult shovelnose sturgeon since they are similar in color. Like the shovelnose sturgeon, their tails are , with the top tail fin being longer than the bottom fin, though this is more pronounced in pallid sturgeon. As with other sturgeon, pallid sturgeon lack the scales or bones found in more modern species of fish. Instead, they have cartilaginous skeletons with five rows of thick cartilage plates that extend along their sides, undersides, and backs, as well as over most of the head. These thick cartilage plates are covered by the skin and serve as a protective armor. The bony cartilage also extends along the backside, from the dorsal fin to the tail.

The pallid sturgeon's mouth is located well back from the tip of the snout. Pallid sturgeon are generally bottom feeders, skimming the sandy reaches of the various rivers and streams in their habitat. Lacking teeth, they use their extendable mouths to suck up small fish, mollusks, and other food sources from river bottoms. Though little is known about the precise eating habits of the species, they are thought to be opportunistic feeders. One study which examined the contents from the stomachs of juvenile pallid sturgeon revealed that their diets were seasonally dependent. Various insects were consumed during some seasons and various fish species during others. These results support the description of the pallid sturgeon's eating habits as opportunistic. 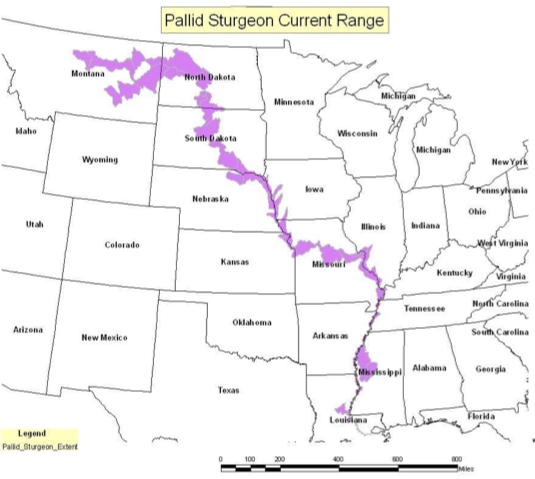 Pallid sturgeon have a long lifespan, living in excess of 50 and perhaps as long as 100 years. They lack bones and scales, which makes it more difficult to establish their age and determine exactly how long they live. As is true for many long-lived species, pallid sturgeon reach reproductive maturity relatively late. Males reach sexual maturity between the ages of 5 and 7 years, while females are believed to become capable of reproduction when they are at least 15 years old. One study of nine females indicated that they begin egg development between the ages of 9 and 12 years, but do not reach reproductive maturity until they are 15 years old. Reproduction does not take place every year; the average interval between spawning is three years, although other studies suggest an interval as long as 10 years. Spawning usually takes place May to July. For several decades, no natural reproduction of pallid sturgeon was observed, since all the fish that had been captured were older specimens. In the late 1990s, young pallid sturgeon were discovered living in a restored riparian area of the lower Missouri River. This was the first documented example of wild spawned pallid sturgeon in 50 years.